How to strip / disassemble a Konami WIndy

Taking apart a windy is generally pretty straight forward bu here are a couple of tricks. I thought I'd post a guide up so that anyone else who needs to do the job doesn't have quite as much head scratching to do as I did. I didn't totally strip mine, just took it apart enough to fit it through the doors into the room it will be living in. Doing to final bits to get it totally taken apart would be pretty self explanatory though. Taking one of these doesn't take any specialised tools. A decent Philips head screwdriver is pretty much all you need. Mine also had a single 10mm bolt. That's all though!

First you need to remove the exremely awesome marquee holder. That's just 3 screws around the back. After that you should open up the rear access hatch, discharge the monitor and remove the chassis. That had already been done on mine so no snaps for that. The monitor in these is unframed and the chassis rests on a metal shelf above the coin box. 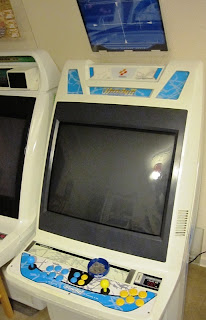 Next open the cp and remove the 3 large screws holding the hood down. 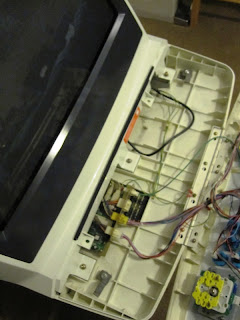 You then need to remove the screws holding the monitor stays in place. It doesn't matter which end you undo them. 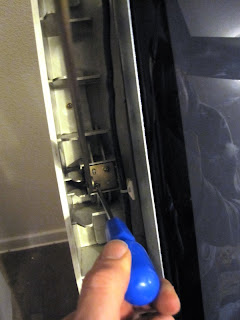 You can them lift the hood right up and undo the screws on the hinges. That will let you lift off the hood entirely. 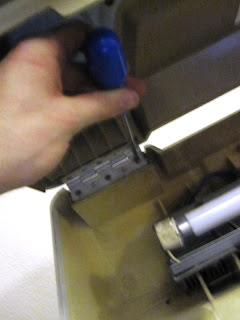 After that you should very carefully pull out the tube. You'll need to take out a few screws and possibly a bolt holding in a ground wire. Be very careful with the tube's neck obviously since it's unframed.

The next step is to remove the front section (including the cp and door surrounds etc) from the base. With that bit removed the cab's easily small enough to go through even the thinnest door if you poke it through sideways.

Either side of the monitor mounting points inside the cp is a screw whcih goes into that front section. Take those out first. 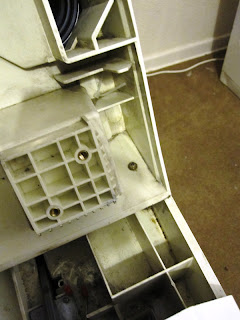 While you're up there you may as well unhook the necessary wires from the i/o board. You don't need to take out all that many. The two USB cables have to come out along with the 3 on headers in the middle of the board. 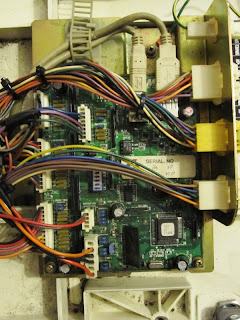 To keep it safe you may as well slide out the pcb board and unhook the jamma > jvs converter too. At this point it's easiest to tip the cab onto its back. Then remove the screws along the sides of the cab. 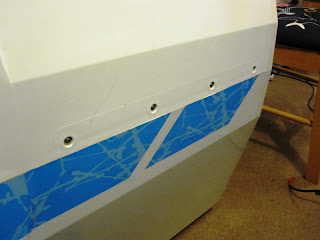 After that all that remains is to remove the screws which hold that front section to the base. The first few are easy enough to find inside the pcb door. 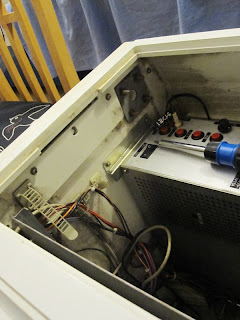 The last couple are tricker to get to though. They're under the cash box and can't be removed without shifting the cash box housing. First undo the 3 screws holding the coin door on. 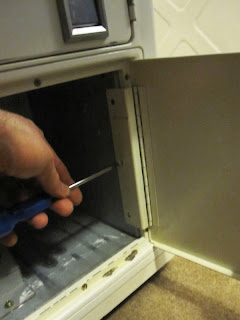 Then remove the door surround screws. 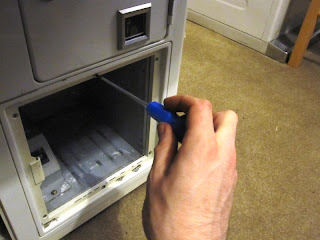 With that done you can gently push back the coin box enough to get your screwdriver in and remove the last couple of screws which go into the base. There are 2 in there I think. Possibly three. 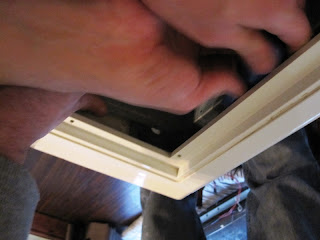 At this point the base section is loose. However there are some little raised nubs on the base which snap into the cp front section. That means you can't just slide the cp section forwards. You'll have to pull the base down slightly and lift up the upper portion a little to get the room. This is made a lot easier by having th cab on it's back. Alternatively you could just remove the base entirely I guess. You'll be left with this as the biggest lump. It's nice and light and easy to fit through a tiny doorway on into a car boot. 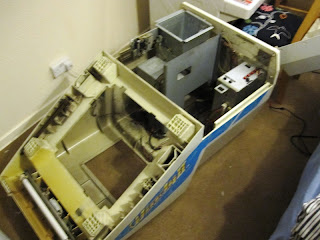 Other than the messing about with the monitor it's an extremely straightforward job. You'll probably have to undo a few ground wires I haven't mentioned but you'll spot that easy enough.
Posted by Thom at 8:37 PM

Email ThisBlogThis!Share to TwitterShare to FacebookShare to Pinterest
Labels: Windy