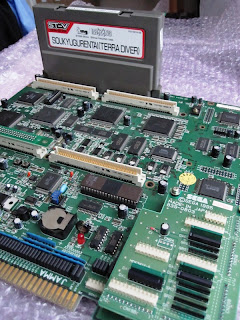 Terra diver is, perhaps predictably, a shooter. Horizontal screen but vertically scrolling. It's on Sega Titan Video hardware, STV. It's basically the arcde version of the saturn. It has interchangeable carts similar to MVS. This motherboard has a modbios in it so region is selectable on start up. There aren't many decent games on this hardare. I may pick up a couple of others at some point but I'm not actively searching for any. Radiant silvergun's the other good shooter on STV but it's too expensive for me to justify picking it up.

Yesterday I had three faulty pcbs delivered. I'll see about getting them repaired at some point. They are prehistoric isle, tatsuijin and sky shark. The later two I'm looking forward to playing and the first is probably worth a credit or two. They were cheap enough so worth a shot. Hopefully I'll get them up and going somehow sooner or later.
Posted by Thom at 6:00 PM

Email ThisBlogThis!Share to TwitterShare to FacebookShare to Pinterest
Labels: STV