I received a very nice parcel today in the post. In it were five shooter pcbs. A couple are pretty run of the mill but there are a few off the beaten track goodies too. 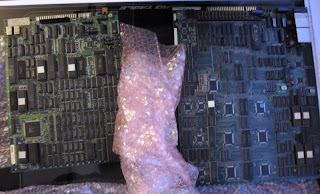 This pair are air buster by kaneko and the jaleco shootie EDF: Earth Defence Force. Neither are especially exciting but I do have a soft spot for these early 90s side scrollers. It seems right that it turned up so closely to thundercross 2. There's a definate family resemblence. 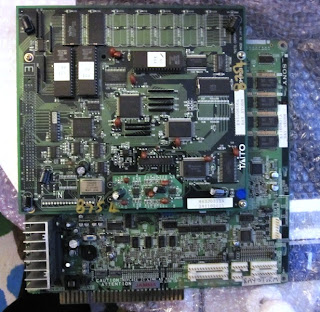 First up is Taito's ray storm. The graphics haven't aged too well but I'm looking forward to giving it a good go. I'm not massively keen on the lock on weapon idea as I've seen it in other games. Perhaps I'll like it more in this. 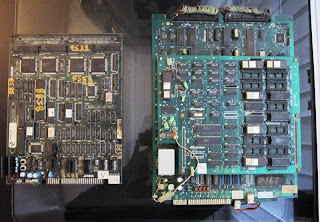 The two most interesting ones are in this pic. Trigon from konami is the board on the left. It was released as lightning fighters in some territories. It's the only vertical orientation game in this group (ray storm is vertically scrolling but horziontal screen). The final board is the irem game dragon breed. I've had a couple of credits on this and am enjoying it a fair bit. The checkpoint system in this and trigon is pretty annoying though. Really spoils the flow and adds to the frustration.

Some pretty cool games here! Now I just need some time off work to enjoy them fully with some nice long play sessions. That'll be a while unfortunately.
Posted by Thom at 7:23 PM