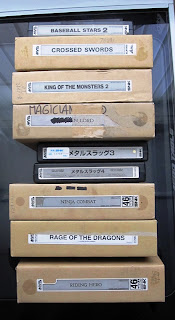 I had a couple of parcels delivered today. There was a fair chunk of MVS stuff in there! Two of the kits are complete, the others are complete minus the flyers. The riding hero one has a bunch of cool extras including a giant cloth banner and a suction cup dangler thing. Pretty cool. The two metal slug games came as part of a trade. The others I bought from New Zealand through a most generous kiwi friend. 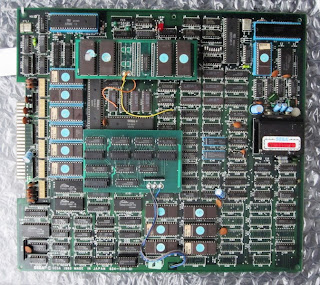 I also received this wonderboy pcb. It's clearly had a bit of work in the past and is currently non working. I'll ship it off for repair soon. That won't be cheap but I got it for a great price. I'm looking forward to getting it up and running. I have a stack of a few pcbs to get repaired now, it'll be a hit on the wallet but it'll be nice to have them running.
Posted by Thom at 5:34 PM

Email ThisBlogThis!Share to TwitterShare to FacebookShare to Pinterest
Labels: MVS