It's been a busy day here today. After getting the aero table parts back this lunch time I spent all afternoon building them then at 7:15 I had this delivered. 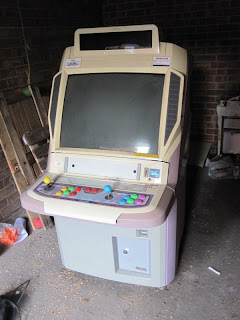 It was a ridiculously great buy: £50 BIN on ebay. It was an IC09 raffle prize. Apparently it had been in regular use until 6 months ago when it was moved to the garage. When it was dug back out it was dead. The owner put it on ebay at £10 start, £50 BIN and I was lucky enough to be the one who got it. Thanks go to kernow for pointing me in the right direction. 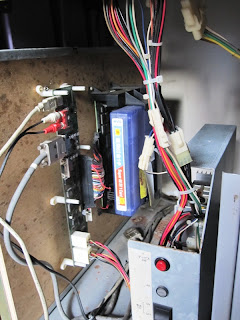 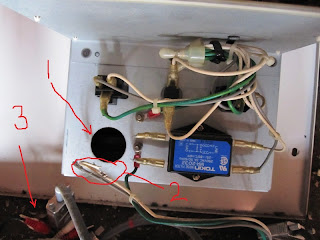 I stripped it down and found out what had happened to it out in the garage. I identified the following clues...

Hopefully it will be an easy fix 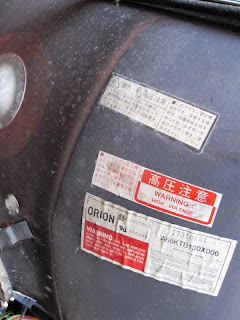 I was told it had a crappy hitachi monitor in it. When I pulled it out I found this orian tube (no idea what they're like. Not heard any mention on them) and, suprisingly a Toei chassis. The Toei in my U4 is awesome so hopefully this will be just as nice! 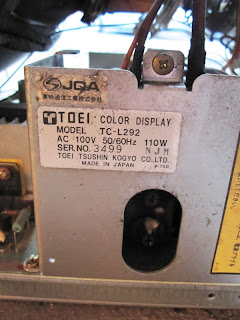 I've stripped it down following this guide (it wouldn't fit inside without doing so) gave it a going over with some soapy water and brought it inside just as the sun was setting. I had to rejig the furniture and cab arrangement to accomodate it. It's 10:30 as I write this but I have the week of work so I plan on building it now. Fingers crossed the broken power leads are the only fault!
Posted by Thom at 10:22 PM

Email ThisBlogThis!Share to TwitterShare to FacebookShare to Pinterest
Labels: Cyberlead