I was excited to get hold of this early seibu shooter. It's pretty uncommon and this set me back a fair few bob. I had to import it from Germany. 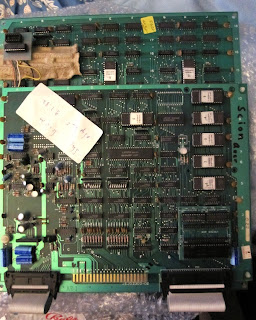 It came with a jamma adapter, a copy of the pinout and some tasty marzipan. It's really common in Germany to throw some sweets or something in with a parcel. I do it pretty often myself since I think it's a lovely idea. Haribo Goldbaren seem to be the most common thing I get in with bits from over there. 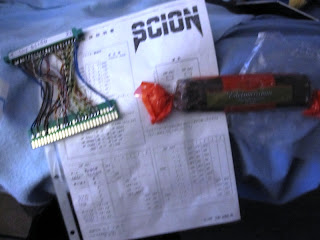 So I popped it in a cab and switched it on. As the boot screen came up there was pretty exciting burst of flame and smoke from a chip. I quickly shut it off and had a look. It's a good job I was testing it outside of the cab or it'd have taken me a while to notice. The smell is pretty distinctive though. 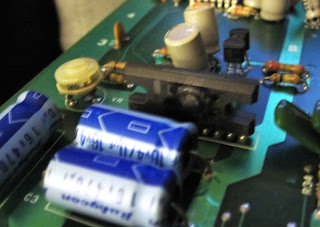 A chip in the audio section had gone kaput. The game now plays ok but with no sound. I have a replacement chip on order. Fingers crossed when I swap that in it'll be 100% working again. It's a real shame it went though. I'm not sure what caused it to go. The voltages were fine, the adapter seems to be wired right and I couldn't see any shorts or anything. I'll give it a thorough check over when the replacement chip gets here and is ready to go in.
Posted by Thom at 3:34 PM

Email ThisBlogThis!Share to TwitterShare to FacebookShare to Pinterest
Labels: seibu