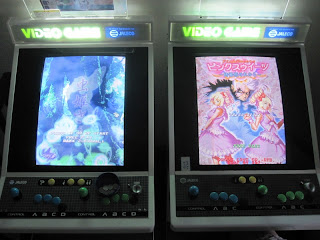 I had a rather wonderful parcel arrive the other day. It really has been a crazy week for deliveries! In it were this fine pair of SH3 pcbs. I tried to snap a picture with both title screens up but I failed, they were slightly out of sync with each other. If they were on freeplay it'd probably be easier. They're mushihime-sama futari 1.5 on the left and pink sweets on the right: both games that were right near the top of my dwindling list of wanted games. I've played a fair bit of both the last couple of days. I predict they'll be hogging the ponys for a while even with all the other awesomeness which has turned up recently. This burst of buying and trading has given me enough to keep me playing for months and months.
Posted by Thom at 1:35 AM

Email ThisBlogThis!Share to TwitterShare to FacebookShare to Pinterest
Labels: Cave