New arrivals - A nice seibu pcb, and a cab and such

I've received a few things since I last posted. First was this samurai showdown IV cart in a rather fetching rental cart. That makes 75 / 148 MVS games I now own. 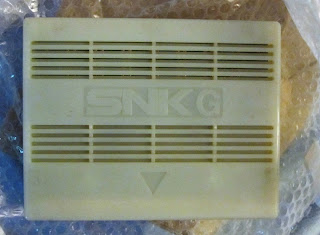 As I've said before, despite not being a fighter fan really I like the Samurai Showdown series. They have a great atmosphere and music. I'm happy to just listen and watch the backgrounds and sprites while I get a kicking from the CP :) I was a lot more interested in this game though! I'd been looking for one for a while. I eventually bought this one from France. Cross channel postage was pleasantly rapid! 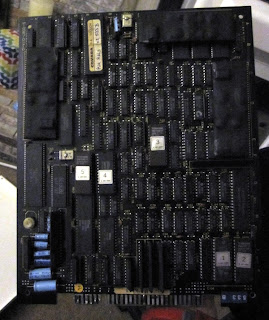 The layout of stuff on this board is pretty wacky. The large black bits are insulated sub boards which are on legs which bend at 90 degrees. There are other chips underneath. The game is... 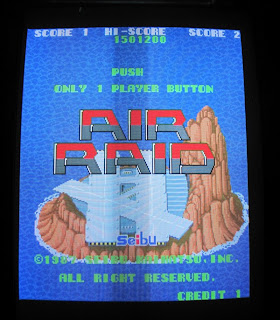 Seibu's proto raiden release Air Raid. This was released in 1987, three years before the first raiden game. The graphics are very cutesy (and awesome) but the gameplay reveals the family resemblance. It only arrived a couple of hours ago but so far I'm liking it. The design is great. The sound isn't really, especially the effects. Game play is pretty good. There are a few different power ups including a speed up and bubble shield which aren't in raiden. I'm not sure there's a vulcan weapon sadly. I haven't found one yet anyway. Kind of a shame. 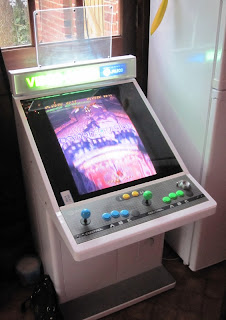 And over the weekend I also collected this beautiful Jaleco Pony III 25. After christmas some time I'll move it to sit next to my other one. They'll make a beautiful couple. It's been repainted and converted to 240V but it's otherwise original. The convergence isn't amazing but it's good enough to not bother me during play. I love these little things. So, so pretty.
Posted by Thom at 7:35 PM