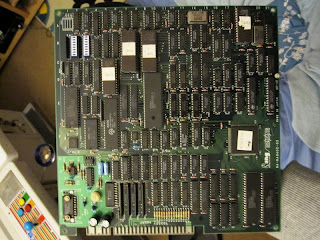 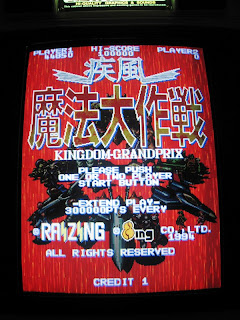 I got a rather nice parcel in the post from Japan yesterday. It contatined this little chunk of raizing loveliness. The game is Shippu Mahou Daisakusen, called Kingdom Grandprix overseas. It's a shooter with a race element to it. You and your competitors race through the levels. You have to dodge bullets and shoot enemies as with other shooties but you can also nudge your fellow racers into danger. Sitting higher up the screen is more dangerous but allows you to travel faster. You can also hold down the A button which stops you from shooting but gives you a speed boost. It's a nice idea for a game.

I've not had all that many games yet. It's pretty looking and the sound is pretty good but I'm not sold on the gameplay yet. Will have to give it a little more time.
Posted by Thom at 6:01 PM

Email ThisBlogThis!Share to TwitterShare to FacebookShare to Pinterest
Labels: raizing