Yesterday I had a very bulky delivery.

First up was this little lady 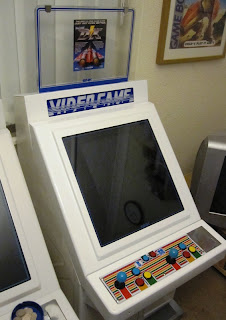 A second candy 18 which will sit next to it's twin. Twins they may be but they're not identical. There are a couple of minor differences between the pair I may make a post on at some point. Not a massive amount, just some little things with colour on the marquee holder and the stripe around the glass mainly. I'd paid for this a while back but left it with its previous owner for a bit then sent it to replay.

Also in the van were this lot: 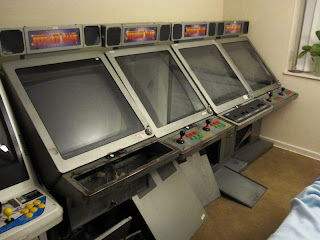 Four very tired, ex trocadero Jaleco pony II 28s. I've been searching for one of these for a long time and when the opportunity to grab these I took it. They are in need of a massive amount of work though. They need repainting, new bezels, new CPOs, new header insert, probably new monitors. It won't be cheap or easy but I'm looking forward to restoring them and they should look fantastic once they're finished. I'll put all the progress on here as it happens!
Posted by Thom at 6:10 PM