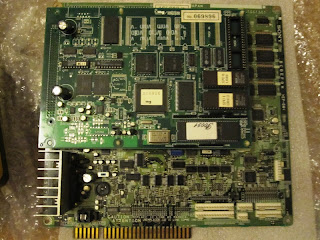 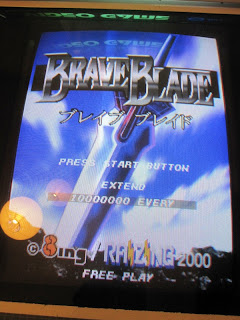 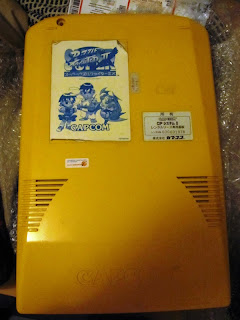 I got a couple more parcels in the post at the back end of last week. Firstly, a brave blade pcb arrived from the US. I'd been looking for one for a little while, I'm really looking forward to getting stuck into it properly. It's really different from all the other games they developed and the game play will take a little getting used to. I've got all the raizing shooties on pcb now. In alphabetical order, the 9 games are:
1944
armed police batrider
battle bakraid
battle garrega
brave blade
great mahou daisakusen / dimahoo
mahou daisakusen / sorcer striker
shippu mahou daisakusen / kingdom grand prix
soukyugurentai / terra diver

Also in the post was a copy of the awesome CPS2 puzzle game, super puzzle fighter II X. This is a yellow cased rental version which is compatible with all region motherboards. I've seen another of these rental in the flesh before although they come up for sale reasonably often. Pretty cool stuff.
Posted by Thom at 8:37 PM